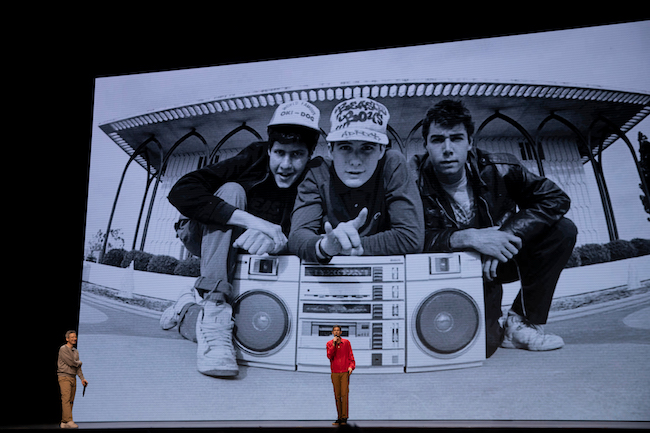 In the early 1980s, three friends embarked on what would become a 30-year adventure. Collectively known as Beastie Boys, the trio comprised Adam Yauch, Michael Diamond and Adam Horovitz - aka MCA, Mike D and Advertisement-Rock, respectively. Though they grew out of New York City's punk scene, they soon embraced hip-hop, and as the years progressed, their creative output charted their growth as artists and as people.

Their rhymes were by turns incisive, hilarious, skewering and uplifting - and could cover the gamut all in one song - whilst the band's music videos set the bar for raw creativity. A number of those videos were directed by Yauch — often under the guise of his fictional uncle, Nathaniel Hörnblowér — but a well-known handful, including those for the Ill Communication tracks “Sure Shot” and “Sabotage,” were directed by Spike Jonze in the early days of his own career.

Beastie Boys stopped being a band in 2012, when Yauch died from cancer, but Diamond and Horovitz then set about telling the group’s story with the comprehensive Beastie Boys Book, which in turn inspired the recently released feature Beastie Boys Story. Directed by their old friend Jonze, the film is a mashup of documentary and live performance, narrated by Diamond and Horovitz, who presented the show onstage to four sold-out theatre audiences as cameras rolled for the film.

To shoot the live performances, Jonze turned to cinematographer Autumn Durald Arkapaw. The two had previously planned to collaborate on a music video that ultimately never rolled camera. "He kept me on his radar," the cinematographer says, "and then we spoke about Beastie Boys Story and the Netflix comedy special Aziz Ansari: Right Now, which we shot the month after.” 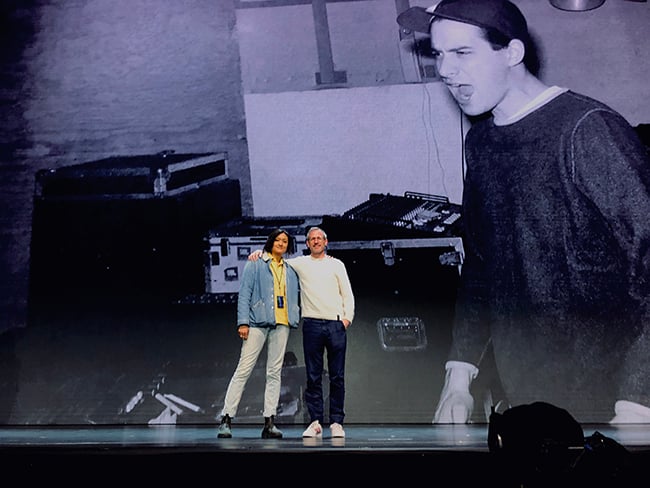 Durald Arkapaw is herself a veteran of music videos, but capturing Beastie Boys Story's live, scripted performances in a theatre setting with multiple cameras was an altogether new experience. "They're not performing music, so our references were geared more towards live stage shows," she says. "Mike Tyson had done a one-man show that Spike Lee directed [Mike Tyson: Undisputed Truth], and we looked at that and a few other live shows. There’s a great sense of connection that you get from watching these people tell their own story.”

For the cinematographer, Beastie Boys Story began with “a lot of rehearsing at the Orpheum Theatre in Los Angeles,” she notes. Jonze, Horovitz and Diamond, she explains, “were working through the script onstage, and we brought in a camera and worked on the lighting design to see what we could pull off when we went on the road. We first went to Philadelphia, where we shot one show at the Tower Theatre, and then we took it to Brooklyn, where we shot three shows in three nights at the Kings Theatre."

Cast and crew took advantage of further tech rehearsals in each venue, and the Philadelphia performance "was like a rehearsal in a sense, but with an audience," the cinematographer says, noting that the final edit almost exclusively comprises footage from the Brooklyn performances. "The repetition was great because there were so many elements that had to be cued. It was scripted, so we had teleprompters, and there were breaks where props would come in. There were so many elements I hadn't seen before in doing these types of live shows."

As they prepped the show in Los Angeles, Durald Arkapaw found Jonze to be decisive as well as receptive to suggestions. "He knows exactly what he wants, but he's also super-collaborative, which is amazing. He'd be very clear, then I would show him something on camera, and we'd tweak from there and come up with what was best."

Beyond ensuring that Diamond and Horovitz would be comfortable with the script and that both cast and crew would be ready for the show's myriad cues, "the rehearsals were important for making sure Spike and everyone loved the camera positions," the cinematographer notes. "If we put one in the wrong place, we'd have wasted the whole show for that camera."

Inspired by an angle in Mike Tyson: Undisputed Truth, one of those positions was achieved with a rail cam fitted with an 8mm lens and placed in the pit at the front of the stage, where it could track back and forth. "Spike loves the wide lenses," Durald Arkapaw says. "I think those shots are so cool because they remind you of when Beastie Boys were performing live." 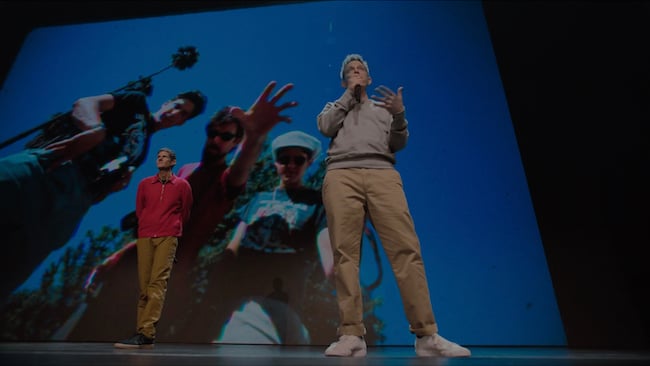 To shoot the live shows, which took place in April 2019, the production employed six Alexa Mini cameras in total. "We had 22 camera people on our team," the cinematographer says, "operators, 1sts, 2nds, Steadicam, the rail-cam guys and our two DITs."

The A camera, operated by Andrew Fletcher, was on a Steadicam and moved throughout the theatre - onstage and through the audience - with K-35 primes. "As the nights went on, he would roam for different audience reactions, getting different vibes," Durald Arkapaw explains. "He'd go up to the second tier and get wide shots from that position, which was really beautiful."

The B camera was the rail cam, whilst the C and D cameras, both with Panavision 3:1 SLZ3 135-420mm (T2.8) Primo zooms, were operated on bazookas from the front of the theatre, centre stage, to capture close-ups of Diamond and Horovitz. The E camera was on dolly track and wore a Panavision PZW 15-40mm (T2.6) Primo zoom to capture wide shots from the back of the theatre. Finally, the F camera was placed in the stage wings with a Panavision 11:1 SLZ11 24-275mm (T2.8) Primo zoom to grab profiles of the two performers; for the final performance, the E camera was moved from its usual vantage and joined the F camera in the wings. 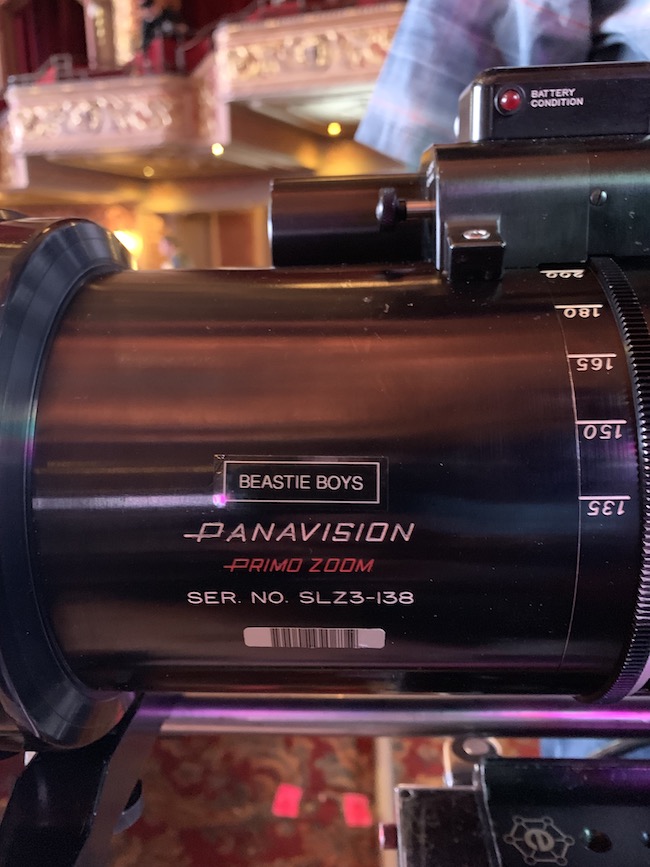 Some of the zooms were modified "to get a more vintage look and take the edge off," the cinematographer shares. "I've been working with Panavision Hollywood for many years, and [technical marketing manager] Guy McVicker over there is amazing. All of the lenses had a nice textured look, a little softened and not so sharp."

Durald Arkapaw has partnered with Panavision for all of her features going back to director Gia Coppola’s Palo Alto in 2013; since completing Beastie Boys Story, the cinematographer reteamed with Coppola for the feature Mainstream, which premiered at this month’s Venice Film Festival. Prior to Palo Alto, Durald Arkapaw recalls, “I had met [Panavision Hollywood marketing executive] Rik DeLisle through a friend, and he’s been my rep ever since. I’ve collaborated a lot with both Rik and Guy; they know my tastes so well, and they’re so supportive. That’s the benefit of working with the same company, appreciating their product and having those relationships. I don’t just call and say, ‘I need this,’ and then go off. It’s a collaboration, and that’s why I always go back.”

Beastie Boys Story was further serviced by Panavision New York, where Durald Arkapaw worked with marketing executive Marni Zimmerman, with whom she had also collaborated on the New York-based feature The Sun Is Also a Star. "When I did that film, I met an awesome camera team out there that I loved to death, so when Beastie Boys Story came up, I called those guys and they introduced me to more people." 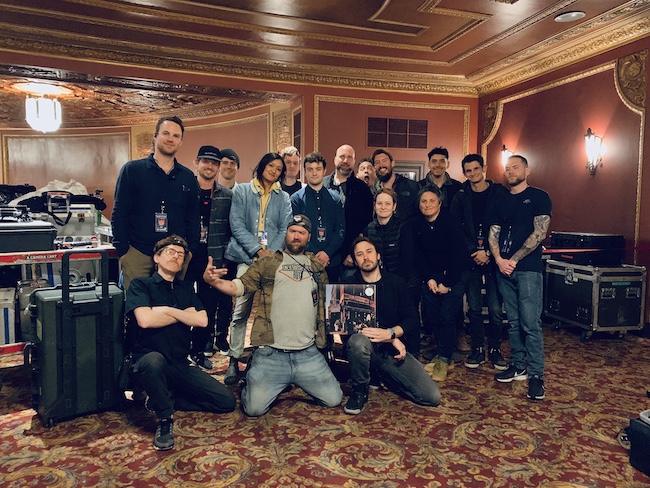 Her crew for Beastie Boys Story included A-camera 1st AC Braden Belmonte and A-camera 2nd AC Brendan Russell. "They helped crew up the full camera team, and they both did an amazing job of keeping track of all our equipment. You have to be so on-point in any situation where you have multiple cameras, tons of lenses and a tight schedule, but especially here. Since this was live, mistakes would be seen immediately, whereas on a feature you can potentially reshoot or everyone can wait for you to fix something quickly. But this was such a fantastic team, and they were all so pumped to be a part of it. When the pressure’s on, people excel.”

The film opens with candid interview footage with audience members as they wait to get inside the theatre; this footage was shot in the lobby and just outside of the Kings Theatre by Lance Bangs. Once the audience is inside, the lights come up to reveal Diamond and Horovitz onstage. As the audience erupts in a standing ovation, the A camera, on Steadicam, races from the back of the theatre toward the front. "I love that shot," Durald Arkapaw says. "Spike wanted to do that, and I thought it was really cool. The energy was great." 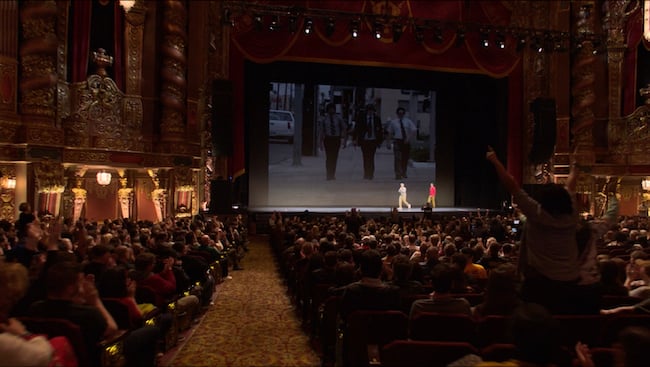 During the performances, the cinematographer was stationed at a tech table at the back of the theatre. "Spike was there with the stage manager, who was calling the show," she details. "We had all the monitors showing us what the cameras were doing, and everyone was on comms, calling it beat by beat."

In addition to her camera crew, Durald Arkapaw worked with a lighting team that included gaffer James Elton Davis, whom she brought out from Los Angeles; New York-based gaffer Charlie McNamara; and lighting designer Spike Brant, who brought an extensive background in lighting live performances. "I'm big on lighting," the cinematographer says, laughing. "It's my favourite. Bringing my gaffers into this situation, where we were doing stage lighting and collaborating with the concert guys, was a lot of fun."

The concert crew, she adds, "found it fun because they're used to working a certain way, and we were coming in with a more filmic background. They were into what we had to say when we would shape the light or give it a little more structure. It was a great collaborative effort.

"We wanted there to be drama and an emotional quality to the lighting," the cinematographer continues. "We wanted the light to have some shape to it so that Mike D and Advertisement-Rock would have a dark side to their key light, and not just a flat front light. And as we were trying to creatively spotlight them, we didn't want the light to spill onto the screen as they were walking around in front of it." 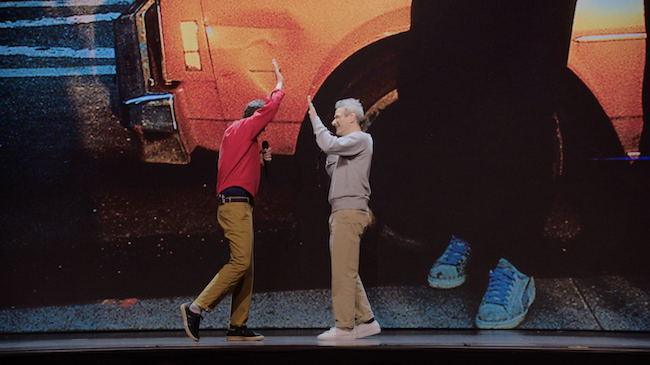 That screen was a massive LED wall that displayed a steady stream of vintage photographs, archival footage, music-video clips, and even a scene from the 1989 feature Lost Angels, which starred a young Horovitz. Fortunately, Durald Arkapaw had previous experience working with such displays. "I had shot the film Teen Spirit in London,” she says, “and that also had LED screens, so I was familiar with using them in performances.”

Each theatre had its own preexisting lighting truss, onto which the lighting team rigged Durald Arakapaw's chosen fixtures. "We tested and picked everything in L.A.," she recalls. "I did research and worked with Spike Brant to figure out what units would perform well and be best for the skin tones. I learned a lot about stage lights and movers from him!" 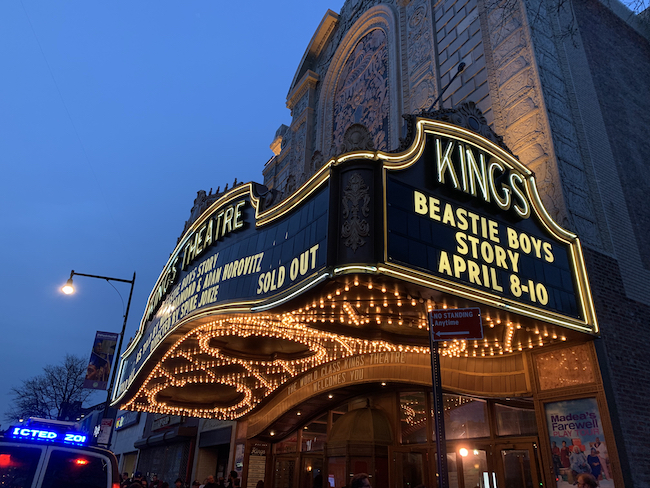 Since premiering on Apple TV+ in April, Beastie Boys Story has garnered five Primetime Emmy nominations, including for Outstanding Documentary or Nonfiction Special. "It was such a labour of love and a nice break from what I had been shooting." Durald Arkapaw reflects. "The crew was so badass, Panavision as always rose to the occasion, and obviously Spike Jonze is awesome - he's one of the best American filmmakers of our time. To collaborate with him is so fun.

"I really enjoy working with like-minded people whom I get along with and am creatively synced with," she adds. "That's really what Beastie Boys Story is about. When you watch it and you’re an artist, you think of your friends. After we saw a rough edit, we all got emotional. Being able to make art with your friends, to have those friends throughout your life, to be inspired by them, and to have them help you grow as a person — that’s really what this film’s about, and that’s what shooting it was like. It was a once-in-a-lifetime experience.” 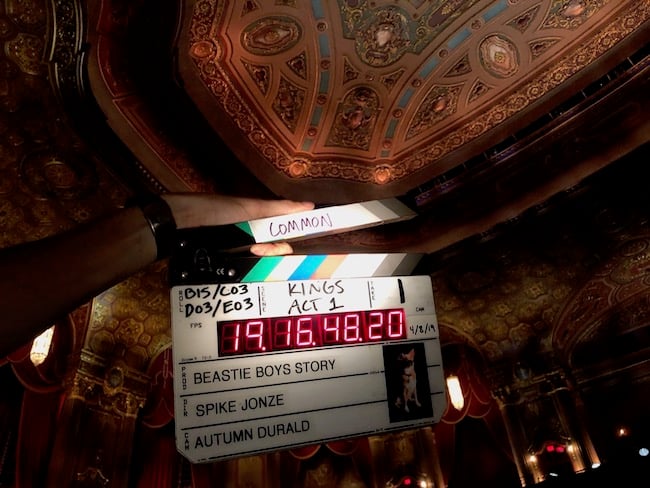