“My career has spanned many genres, a journey I could have never predicted,” says cinematographer Simon Reay. With credits that run the gamut from the series Man vs. Wild to the splinter unit for Jurassic World: Fallen Kingdom, Reay’s recent work includes the Apple TV+ series Lovely Little Farm, which follows the adventures of kid sisters Jacky (Kassidi Roberts) and Jill (Levi Howden) and their menagerie of farm animals.

Reay worked with Panavision London to assemble his camera and lens parcel for the series, and here the cinematographer shares how he approached the project's visuals.

Panavision: What was the process of defining the look of Lovely Little Farm?

Simon Reay: The look started early in preproduction, with production designer Marc Homes and directors Jack Jameson and Matt René. The entire farm was constructed on an open countryside location; the buildings, lavender fields, roads and trees were all designed and landscaped. My main input on the set design was a request for the buildings to face south and for a small group of trees to be planted about 200 feet from the house so I could hide my ‘Italian sun.’ 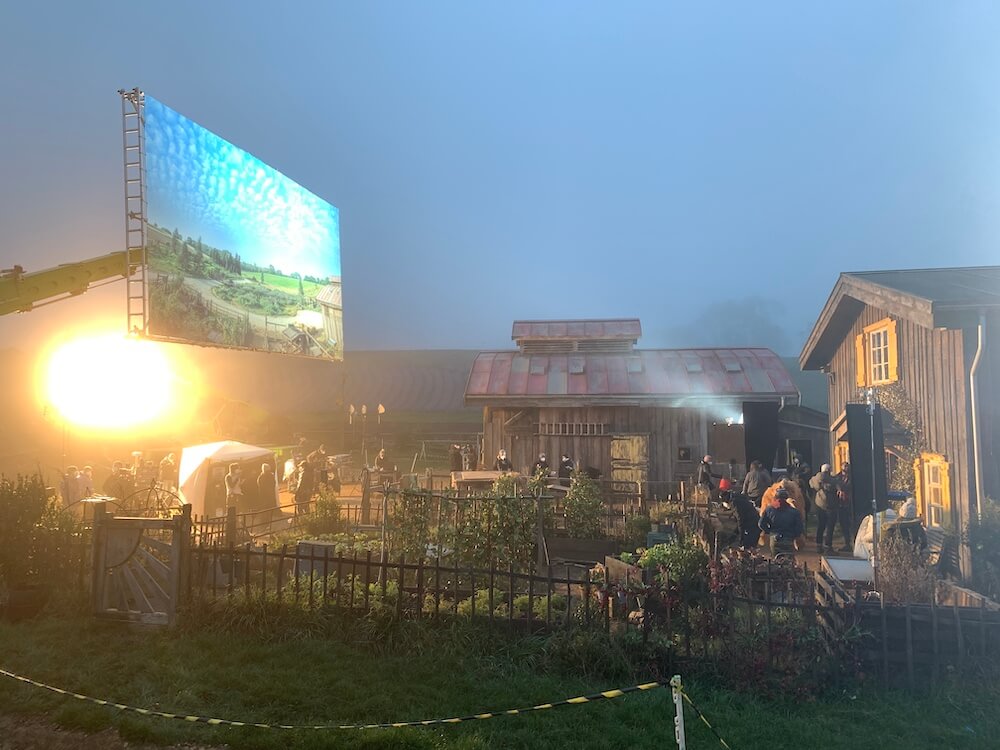 Photographically, the look started to establish itself when we were boarding the VFX sequences of Quackety, a 5-inch talking CG duckling who is also a main character. Jack, Matt and I drew the boards for these scenes many times over so we could make sure we were treating her in the same way you would any other cast member - and, importantly, so this could be accurately budgeted by ILM over 16 episodes.

How would you describe the series’ look?

Reay: Apple wanted the show to feel timeless, not just in the photographic look but throughout its design. The set and props have a worn, lived-in feel to them. The characters’ possessions have been looked after and repaired or repurposed. There is no technology and no plastic anywhere. All the costumes are made from natural fibers, down to the sheets on the bed.

My visual approach was to photograph and light the sets and characters in a way that wouldn't provide the perfect modeling or beauty light for them. I wanted the lighting to feel slightly accidental, as if you'd just turned up and shot with what was in front of you. When the sun sometimes sneaks trough a gap past a tree and into a room, hitting the wall and causing a pattern - that feel!

Were there any particular visual references you looked at for inspiration?

Reay: Yes, one film that sums up the ‘feel’ of Lovely Little Farm is Silkwood, a Mike Nichols film from 1983. Utterly different subject matter, but there’s just something so respectful to the actors in this film, the way we witness them through a camera which is often just on a tripod. I really enjoy this approach to photographing scenes. Picking one spot to shoot from gives a perspective to the audience and allows the actors to move rather than the camera.

When actors work a space with the director and without equipment restrictions or preconceptions, the feel and pace of the scene starts to present itself. I find watching a block with your eyes, without a lens, gives you a sense of the scene as a piece of theatre. The director and I will often watch the block from various parts of the set and then discuss afterwards what the point of the scene is and where we feel the scene should be witnessed from. Other setups can embellish the scene, putting weight on editing for story beats rather than shooting coverage. 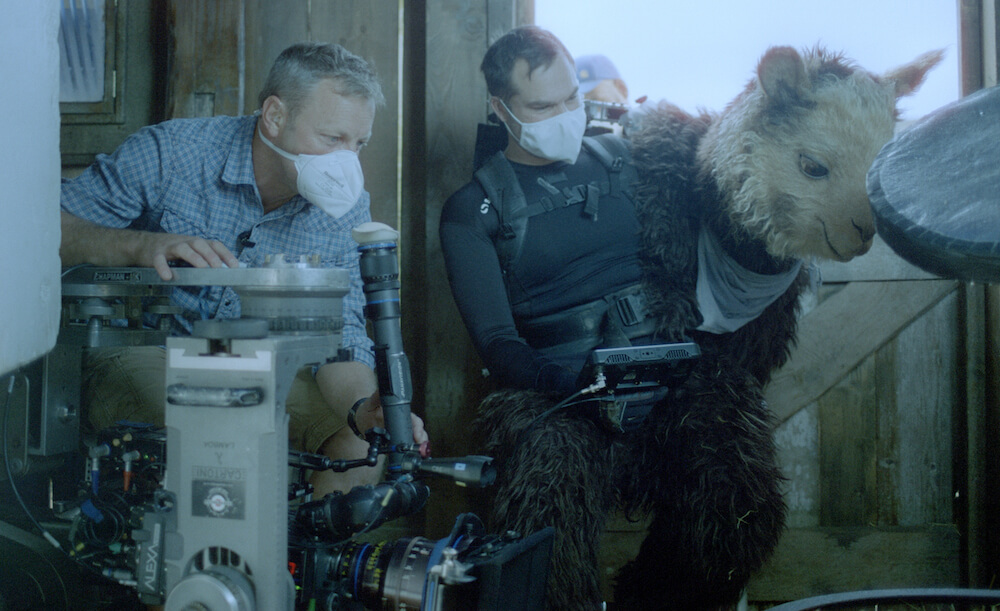 This way of working really helped us on many occasions because it's fast and we had such a varied cast, often all of them in one scene. The cast included children, adults, an alpaca and a pony with skin artists inside, a real duck, a CGI duck courtesy of ILM, a real donkey, a five-bar system donkey head, sheep, chickens, goats - the list goes on! Getting all these characters into a scene only worked because their lines were delivered as an ensemble.

Reay: Panavision is a very special company. It feels bespoke. They are well-organized and kind, and someone is always on hand who knows the answer to your question. The equipment they have is totally unique to them; I love the custom-designed feel. I am someone who enjoys building and designing pieces of equipment, so Panavision is a very good fit with me.

What optical characteristics do you see in the Primo lenses that made them the right match for Lovely Little Farm?

Reay: Primo lenses are a wonderful place to start your lighting ideas. They just feel right. I was looking for a compact zoom, and the PCZ 19-90mm [T2.8] was perfect. We used the zoom capability a few times, but the main reason for having this lens was simplicity. Having to constantly change lenses can get a bit tedious, so just adjusting the zoom to each focal length meant more time for performance. 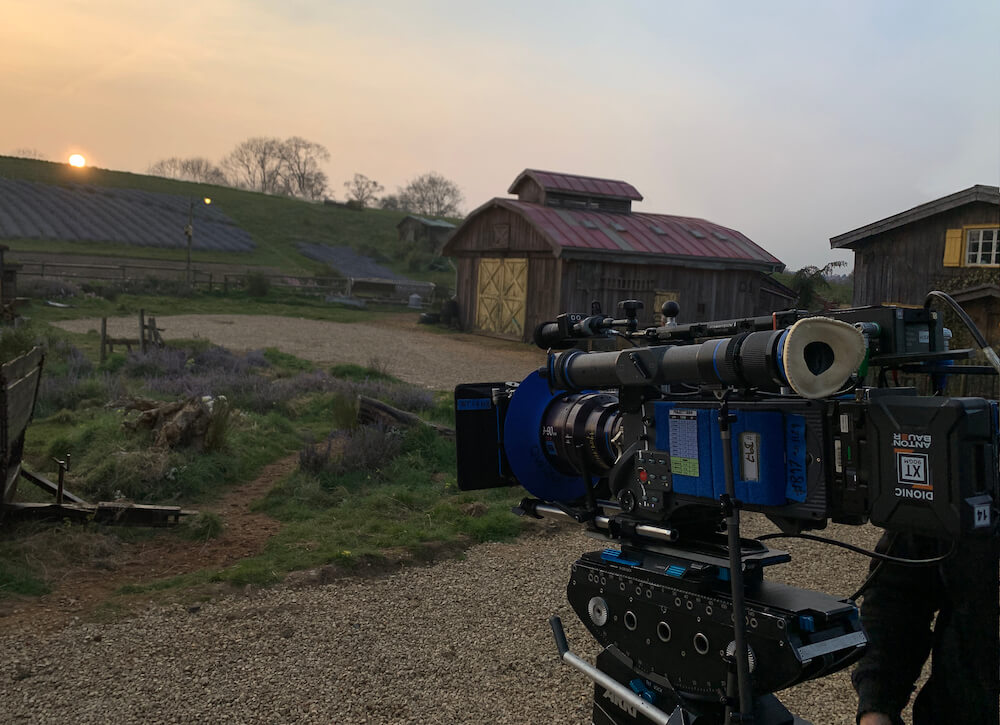 Our parcel also included the 11:1 [SLZ11 24-275mm T2.8] Primo zoom and a handful of primes, including some wide close-focus options we primarily used with the Panavision Compact Periscope. This was a vital piece of equipment when shooting the duckling, as we could get a subjective perspective on a character only 5 inches high.

I shot most of the show at T4 up to 90mm, then incrementally up to T11 beyond 200mm.  T4 feels right to me. It allows the actors space to work without drawing attention to focus changes.

How does this project differ from others in your career?

Reay: I initially wanted to shoot on 35mm film to match the classic, timeless feel Apple wanted for the show. Sadly this didn’t happen, but it made me think about what I used to enjoy about shooting on film and how I used to work. On film, I would suddenly change my way of thinking and examine the scene in terms of tonal range and exposure values. Because you don’t know exactly how the image will look, it allows room for a surprise, a spike, something interesting that wasn’t preplanned. It’s similar to the way a director is looking for an actor’s performance to surprise and lift a scene off the page.

It was this mindset and excitement and feeling of being surprised that I'd been missing with digital. I found myself feeling a bit disappointed looking at digital rushes because I'd already seen them. The only way to avoid seeing the image in electronic form was to use a camera with a mechanical shutter and optical viewfinder - the Alexa Studio. Panavision provided three bodies, and I then worked exactly as I would have on film, sometimes not seeing the image at all until the next day. Scary but exciting!